Business Culture. It’s been the subject of so many acres of ink in the last few years. The essence of what makes a business tick and how its staff interact with each other is paramount to the way a business operates and presents itself to the world.

In early October, I had the good fortune to visit one of our largest suppliers – Filtrec S.p.A. at its factory in Telgate, Italy. It was evident from the first step through the door and my interaction with Sofie, Filtrec’s receptionist, that this was a place people liked to work. Everywhere I went in the facility the staff were smiling. Not the grimace of someone putting it on for a visitor either, these were genuine beaming smiles of people that were enjoying themselves and liked their work, their fellow workers and their workspace. I often say I prefer to deal with companies and people I like, but this interaction with the company and staff gives a new dimension to that preference. I like to deal with companies whose staff like them, and the good feeling at Filtrec was infectious.

Filtrec was founded in 1991 by the three Modina brothers – Sergio, Marino and Lino. Sadly, Lino passed away in 2002. Sergio and Marino remain in the business to this day – Sergio as President and CEO and Marino as Head of Logistics. Lino’s two sons are working in the factory: Giacomo is Lean & Supply Chain Manager and Matteo in Purchasing. Sergio’s daughter, Alessandra, is in Human Resources.

The 10,000 sqm facility in Telgate near Bergamo in Northern Italy was opened in 2017 and includes one of the largest and certainly best-decorated filter laboratories I’ve ever seen, but I’ll come to that later. The building is designed using the patented Aliant anti-seismic building system which only has four supporting pillars in the entire factory. This means there is so much more room unencumbered by support structures than would be in a normal style building.

The factory itself is spotless and state of the art. A clean sheet design has enabled workflows that adhere to the very latest production methodology for ultimate efficiency. Filtrec has created its own machines for production that aren’t found in any other factory. Filtrec’s private label clients have been extremely impressed by the factory and lab.

The office space is light and airy and architecturally designed. Each room has a selected Pantone colour palette which weaves its way through all the furnishings and walls. Each team has its own special feel and flavour.

One thing that shines through is the fun and slightly whimsical nature of the organisation. This is illustrated best in the laboratory. Filter testing is a pivotal part of filter manufacturing. Not only to benchmark product against the competition and original equipment filters but also to spot test production. I’ve been in more filter labs than I can count… Typically, they are serious places, full of serious people doing serious work, and tinged with the faint smell of machine oil, hydraulic fluid and diesel. Filtrec’s laboratory is no different in that way. Where the difference comes in is the walls. Painted in street art style they tell the story of Tracy and the Dragon Phil who battle the witch Dusty in the Kingdom of Tidonia. Needless to say it’s the “Magic Filter” that saves the day. In the same vein, the plant pots made from filter casings scattered around the office and factory are something I’ve never seen before and certainly brought a smile to my face. The collaborative marketing team of Angelo Furlanetto and Chiara Metelli do some amazing work. 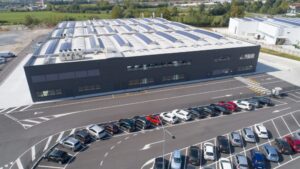 Levity and humour are an important part of workplace culture and this is certainly evident at Filtrec. Family businesses are often already doing so many of the culture pieces that are now a buzzword in the larger corporate world. By nature of having family working in a business that extends to thinking of the staff members of the business as part of an extended family. A family business needs to be serious but can have greater propensity to embrace the softer sides of what forms good workplace culture.

Another area in which Filtrec is at the cutting edge is in the employment of women. A large percentage of the manufacturing staff at Telgate are women. Filtrec says that women are more efficient and make fewer mistakes. “Our exclusive elements are treated like jewels” according to General Sales Manager, Andrea Pernici. You can’t argue with those metrics.

I’ve seen plenty of filter factory canteens on my travels but none with food of this standard. Good, healthy food and beverages are provided free of charge on-site. This has enabled the lunch break to go from 90 minutes to 45 and the office staff can now go home an hour earlier. What a great initiative for staff health and mental wellbeing. Again, everyone in the canteen, the kitchen staff and the factory staff were all smiling and in good spirits. 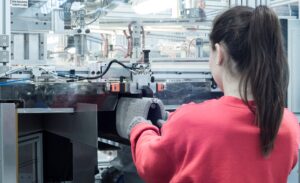 Family Business Success – from one family business to another

Grazie Mille to Andrea Pernici, Sergio Modina, Angelo Furlanetto and Chiara Metelli for your assistance with this piece.