But I’m an expert…

I’ve heard it said that in the age of the internet, everyone’s an expert (or at least regard themselves to be one after a two-minute brush up on a particular topic via Google).

We strike this quite often at Filter Supplies, as you can imagine. If I had a dollar for every time I’ve heard, “I know what I’m looking at, I’m a…” then I wouldn’t have to work for a substantial amount of time.

As someone with 26 years of experience in filters, I’d like to highlight how misconceptions and wrong conclusions can be drawn when the person on the other end of the line mistakenly believes they’re an expert. Here are a couple of examples.

Experience, knowledge, and understanding is key to assessing a filter problem

The first example is in regard to a visibly over-pressurised hydraulic filter. The end cap had split from the can and the can itself was noticeably ballooned from the extreme pressure it had endured. 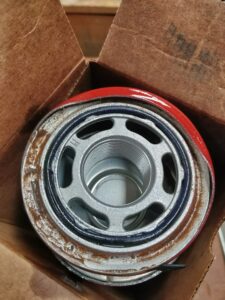 This particular element is no lightweight – it has a burst pressure of 1300psi and looks like you could jack up a tank with it. The element was sent back after a failure. Cut in half…

Me: “Why was the element cut in half?”
Other: “I needed to make sure there was nothing wrong with the client’s machine.”
Me: “How could you ascertain that by looking at the element?”
Other: “I know what I’m doing, I’m a mechanic.”

Specialising in a related field doesn’t always translate to another, and as skilled as this person undoubtedly was in his own field, sadly, being a mechanic doesn’t automatically equip you with all the skills needed to diagnose a filter failure. If the mechanic had known what they were looking at, they would have seen the noticeably deformed can and the pleats separated from the pleat locking resin on the inside of the element. What was also obvious was the massive dirt loading, evidenced by the huge amounts of mud, both inside and outside the element.

Another example of an evaluation not leading to an accurate conclusion was by a large multinational mining company looking to move away from OEM Supply. They asked for a batch of sample filters for evaluation, which we happily provided.

A couple of months later we received a report back stating that the equivalents were inferior to the OEM items. They had come to this conclusion by cutting the spin-on filters open and visually inspecting the air cleaners.

I can give you an estimation of the quality of a spin-on filter once it is apart. Some basic things stand out, like pleat quality, spring type and end cap manufacture. You probably wouldn’t believe some of the things I’ve seen inside spin-on filters – cardboard end caps, extra bits of superfluous plate steel in the can to give it weight (because weight is always a marker of quality)…the list goes on. 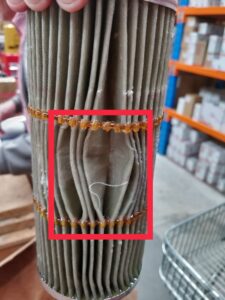 This mining company had performed the most rudimentary of analyses and made conclusions on quality and performance via factors such as number and dimension of holes in a spin on end cap, type of centre core construction, and seal pliability.

Aftermarket filter manufacturers create filters to meet or exceed the performance of the OE element. They do this in their own way and the endpoint is the performance, not matching how the OE filter looks. A Baldwin equivalent with identical performance won’t look the same in end cap, centre core or even how the base elements inside the can appear.

Many brands such as Caterpillar also over-engineer their filters purely for cosmetic purposes. Your spin-on oil filter doesn’t have to have a 3000psi burst pressure. In some instances, this can be massively detrimental.

Unfortunately, the OE manufacturer in question wouldn’t provide performance data for their elements to allow a comparison with the aftermarket alternatives. By contrast, we can provide full performance data for every filter we sell. We get asked for filter data all the time, but without anything to compare it to, it’s absolutely worthless. The headline micron rating that some manufacturers put on their websites is without context, or information on the test used and the actual efficiency achieved.

Moral of this story? Unless you have all the data, or actually are a filters expert, any conclusion you come up with is more than likely flawed.